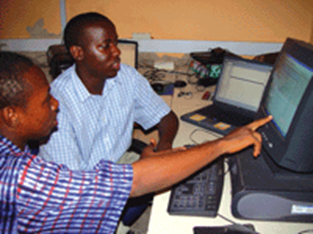 Herman Chinnery-Hesse does not balk at a challenge. He left a comfortable life as a software developer in London in 1990 and set out to prove to skeptical friends what he had always maintained: his native country, Ghana, was a land of opportunity waiting for entrepreneurs with innovative business ideas.

With no start-up capital beyond limited personal savings, no infrastructure, and no equipment other than his old computer, it was clear to the young man that he had to rely on the only resources available to him: his determination and his creative talent for writing software programs. “I knew I was no genius,” says Chinery-Hesse, “but I had seen for myself in the [United States] how it was possible to take a good idea and turn it into a good business.” And so was born S.O.F.T. (later renamed as theSOFTtribe Limited) at a time when the Ghanaian software industry was non-existent.

On the basis of a single software package which he had developed when freelancing in the United Kingdom, Chinery-Hesse landed his first contract with a Ghanaian travel firm while still en route to Accra. The payment enabled him and his founding partner, Kojo Gyakye, to buy a second computer. When they managed to receive their first contract to write a network application, the company still did not even have a network of its own on which to run the program. The young entrepreneurs had an early breakthrough when the Switzerland-based multinational, Nestlé®, contracted theSOFTtribe to develop production management software for its operations in Ghana. Chinery-Hesse laughs as he remembers the bemused expressions on the faces of the visiting Nestlé executives when he finally let them see the theSOFTtribe business premises – a couple of desks in his bedroom in his parent’s home. “But by then it was safe to show them,” he recalls, “the project was near completion and we had won their confidence in our ability to deliver.”